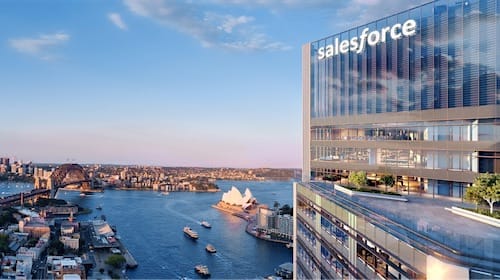 On May 26, 2020, Posted by CRS Info Solutions , In Online Tutorials, By Salesforce certification,sydney , With Comments Off on Salesforce plans a sustainable tower in Sydney

Salesforce had some major announcement this week.  Salesforce released an official statement saying that they are planning to build a shiny tower in Sydney, Australia in 2022.  Also, Salesforce has guaranteed that it will bring 10000 jobs in the next five years.

There are lots of building in Australia that are two stars rated or three stars rated. None of them has been rated six stars. A 6-star building would mean that the building that has a sustainable design.  Denoting that Salesforce is a company that respects nature. So, it will apply an environmentally friendly approach to design their new tower

What will be the building look like, when it gets completed?

According to recent news from Salesforce, the building would be the tallest one, that Sydney has ever seen (53 storeys). The building will sit in a circular quay.  Now the top floor of the top will be allocated to dedicated salesforce employees and partners.

Some of the floors will be formed as an innovation Centre, Social lounges and areas where new ideas could be discussed.  So basically, salesforce tower will be a platform where various salesforce employees can collaborate

Why this idea suddenly

Well, Salesforce is a company that believes in growth. They think as more and more people know about Salesforce, more and more jobs can be provided to the society.  This is a plan to expand in Australia and provide jobs to hundreds of employees in the next five years.

Earlier this week, there was one more announcement from Salesforce that raised a lot of attention.  Salesforce is planning a similar sustainable design in Dublin. The presence of Salesforce and Dublin is not new. Salesforce emerged in Australia 15 years ago and in Dublin back in 2001.

Get notified on our Free Interactive Online Demo Session.